I looked up to my dad! He taught me so much more than I thought I would learn from him. I have so many memories with my dad, going camping, travelling and learning how to make a songs! He’s a super hero and good guy for me and my brothers!

I interviewed by Dad and he explained his clubfoot to me and I want share that with all of you!

Kelsey: How did your parents find out what was going on with your foot?

Mike (Kelsey’s Dad): When I was born, it was obvious that my foot was bent inward, and they call that Clubfoot.  By the way, my nephew, Eric, also had Clubfoot but it was both feet and he had a different surgery where they broke his tibia bones.

Kelsey: Why do you have a foot smaller than the other foot?

Mike (Kelsey’s Dad):I had too many casts during my childhood and when your foot is in a cast it can’t grow.

Kelsey: How many casts/surgeries did you have on your foot?

Mike (Kelsey’s Dad): I had 15 casts total.  I had one surgery when I was 5 and I fractured a bone in my foot when I was a teenager.  Most of the casts were from when I was a baby until I was 5.  We also tried orthopaedic shoes and I had a bar between my feet when I was in bed.  When I had the surgery, the doctor cut 11 ‘V’s out of my bones.  I bled through that cast, so they gave me a new one.  That was cast #14.  Cast #15 was from jumping down some stairs as a teenager.

Kelsey: Did your classmates or friends know that something was different about your feet?

Mike (Kelsey’s Dad):  I had trouble buying skates, so I didn’t learn to skate until I was 10.  I played soccer and started guitar when I was 10.

Kelsey: Does your foot hurt now?

Mike (Kelsey’s Dad): Sometimes.  The doctor thinks it’s Arthritis in the area where I fractured it.

Mike (Kelsey’s Dad):  We moved a lot so I changed schools many times in the middle of a school year, but it was ok.

Kelsey: How many siblings do you have in your family?

Mike (Kelsey’s Dad):  I have a brother, a sister and a half-brother.

Kelsey: What kind of school did you take after high school?

Kelsey: What are your hobbies?

Kelsey: How did you get into music?

Mike (Kelsey’s Dad): I saw my Uncle Ron and my Uncle Kevin play guitar and then I really wanted to do it too.

Kelsey: What kinds and how many bands were you in?

Mike (Kelsey’s Dad): Currently, I am a Maintenance Manager at EVRAZ.

Kelsey: How many years have you worked at EVRAZ?

Kelsey: Where did you go in the world?

Mike (Kelsey’s Dad): My wife dragged me to Mexico, Florida, Hawaii, Arizona, California and more.  I didn’t love it, but I did enjoy going to Nashville.

Here is some information I found about Clubfoot on the internet. Please check it out. 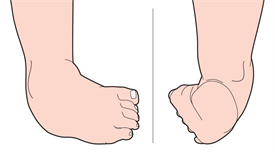 Clubfoot is an abnormal inward curving of the foot. One of the most common nonmajor birth defects, clubfoot affects a child’s foot and ankle, twisting the heel and toes inward. The clubfoot, calf, and leg are smaller and shorter than normal. Clubfoot is not painful, the deformity is correctable, and your baby is probably otherwise normal.

Approximately 1 in every 1,000 newborns has clubfoot. Of those, 1 in 3 have both feet affected and 2 out of 3 are boys. Clubfoot is twice as likely if the baby’s parents or their other children also have it. Less severe infant foot problems also are common and sometimes mislabeled as clubfoot.

Treatment begins right away to correct the alignment of the foot. The goal is to make your newborn’s clubfoot (or feet) functional, painless, and stable by the time he or she is ready to walk.

Your foot and ankle orthopaedic surgeon will start treatment by gently stretching your child’s clubfoot toward the correct position. They put on a cast to hold it in place. One week later, they take off the cast and stretch your baby’s foot a little more, always working the foot toward the correct position. They then apply a new cast. One week later you will return to the surgeon and they will do the same thing again. This process, called serial casting, slowly moves the bones in the clubfoot into proper alignment. Your surgeon uses X-rays to check the progress. Casting generally repeats for 6-12 weeks and may take up to four months. (Note: Anytime your baby wears a cast, watch for changes in skin color or temperature that may indicate problems with circulation.)

In about half of cases, the child’s clubfoot straightens with casting. If it does, he or she will be fitted with special shoes or braces to keep the foot straight. These holding devices usually are needed until your child has been walking for a year or more. Muscles often try to return to the clubfoot position. This is common when your child is 2-3 years old but may continue up to age 7.

Sometimes stretching, casting, and bracing are not enough to correct your baby’s clubfoot and surgery is needed to adjust the tendons, ligaments, and joints in the foot and ankle. This usually is done when your child is 6-12 months old. Surgery corrects all of your baby’s clubfoot deformities at the same time. After surgery, another cast holds the clubfoot together while it heals. Since it’s still possible for the muscles in your child’s foot to try to return to the clubfoot position, special shoes or braces likely will be used for a year or more after surgery.

With treatment, your child should have a nearly normal foot. He or she can usually run and play without pain and can wear normal shoes. The corrected clubfoot will not be perfect, however. You should expect it to stay 1 to 1 1/2 sizes smaller and somewhat less mobile than the normal foot. The calf muscles in your child’s clubfoot leg also will be smaller.

Thank you to my Dad for this interview and helping educate all of you!

We had a game day with our roommates. We played the game trouble. In the early evening we watched Frozen two and then after supper we had Rose Club zoom radio at home. It was different music and then at the end we sang happy birthday to everyone in December. So, it reminds me of birthday bash but only at home. It was a fun thing to do. I appreciate Rose Club making fun activities that we can still do at home.

I got a colour by number for Christmas from Joel and Ashley. It took me only about two weeks to finish the colouring book.

After colouring books, we watched Freaky Friday on Disney plus. Rolling around on the mat while watching YouTube videos. We painted my fingernails; I like bright colours! We did a face mask and watched a Cinderella story.

Baking chocolate peanut butter M&M cookies, and colouring princesses! Inside of the book they had two pages of stickers to decorate the pictures. What a great Sunday afternoon with my Mom and Dad!

Spring cleaning before getting ready for my new bed!

We got a new fish named Red Fin!

Poured spices into jars and making a homemade lemon cake!

This morning I got my new bed. It can massage my body, put my head up, feet up and has lights under the bed.

Playing Yahtzee with Emma and Theresa. We had a movie day! Tyler got Disney + so we watched Frozen one and then watched the 1st Cars movie.

I really enjoyed the second Frozen movie better than the first Frozen movie because I felt it was good for all ages to watch. I thought the first one was kinda too childish for my age group. Then we watched Cars, and it was a really good movie as well.

I even got a phone call from Centra Cam today, it’s very nice to catch up with your co- workers in this strange place in the word right now! I can’t imagine what life would be like without phones or not being able to FaceTime call your family and friends in the times like this! I would have gone nuts for the 1st five months of COVID because I couldn’t go home every Sunday afternoon.

We saw the lights on Main Street and ice statues of a shoe, and dog and a horse! We also watched Last Song.

Learning how to make homemade bagels with Ashley and Joel! You fry your dough in olive oil and butter into a pan on the stovetop. I watched Joel and Ashley on Facetime and they walked me through it. It was lots of fun. The looked pretty good and they said they tasted good.

We watched A Star is Born it was also really good, you should watch it if you haven’t. Making energy bites, playing games and nails with Mom!

For Christmas, I got some bath salts, and some bath bombs from my auntie Gail! It’s smells really nice!

Making valentines cards! We made cards for the teams for love and happiness on Valentine’s Day!

I hope you have a good Valentine’s Day.

Sela is not your typical business theme. Vibrant, bold, and clean, with lots of space for large images, it’s a perfect canvas to tell your company’s story.
Sela is responsive, which means it adapts to any screen, providing your visitors with a great browsing experience on any device.